Basketball belongs to the "Big 4" of US sports. We explain the most important facts, rules, and moves of the popular ball game.

Basketball was invented in 1891 at the YMCA Training School in Springfield, Massachusetts, by Canadian physician and educator James Naismith. His goal was to create a ball game that his students could play as an indoor sport in the winter and that had a low risk of getting injured compared to other US sports such as American Football.

On January 15th, 1892, the Springfield College school newspaper published the 13 basic rules of the basketball sport, which have hardly been changed to this day. The first official basketball game in history was played in Springfield on January 20th, 1892.

The new sport quickly became popular in American universities and colleges. The first professional basketball teams emerged at the beginning of the 20th century. In 1925, the American Basketball League (ABL) was founded, featuring teams mainly from the Northeastern United States but also from Chicago and Cleveland. 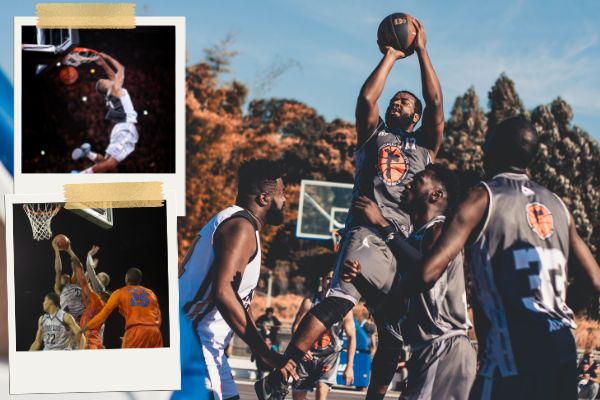 Basketball: the most important facts

Basketball is a fast and action-packed sport. You should learn some basic information and rules to be able to follow a game well:

Basketball is played on a rectangular court measuring 28 m in length and 15 m in width. It is restricted by the sidelines and the end lines. The basketball may not touch or cross these lines. Also, the player in possession of the ball must stay within the sidelines and end lines.

Various circles, lines, and zones are marked on the playing area. In the center is the center line, which divides the court. The center circle is marked around the center point. It has a radius of 1.80 m and is used to execute the jump ball at the beginning of the game.

Basketball baskets are placed at both ends of the court at the height of 3.05 m. Directly under the basket is an area called the no-charge semi-circle. Here, fouls committed by the attacking players by jostling or pushing (charging) are not penalized.

The rectangular area in front of the baskets is called the lane or zone. Players of the attacking team may not stay in this area for more than three seconds without performing an action on the ball. The semi-circle adjoining the lane marks the area where free throws are executed.

A large semi-circle with flattened sides surrounds the basket at a radius of 6.75 m. This is the three-point line, i.e., the distance from which shots at the basket can be made, which score three points if they are successful. 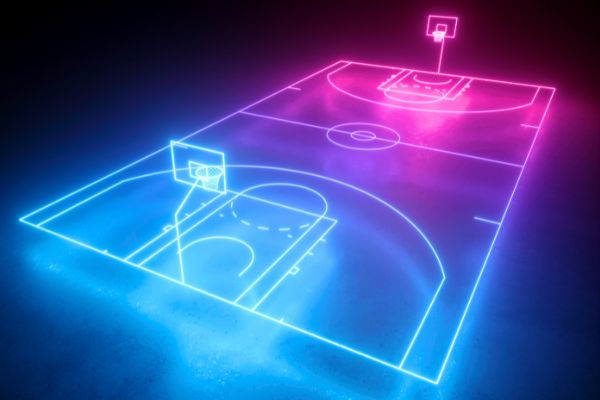 You don't need much equipment to play basketball. Once you have these three things together, you're ready to go:

In basketball, only one piece of equipment is needed – the ball. It is made of synthetic material or leather and nylon threads. The official basketball used for professional games has a circumference of 749 to 780 mm and weighs 567 to 650 g.

Basketball players wear comfortable, loose-fitting shorts and T-shirts. Some players also wear knee or elbow pads to prevent injuries in the event of a fall.

You also need special basketball shoes, where the ankles are protected. They allow maximum stability during abrupt changes of direction and prevent an injury from twisting. The shoes must also provide good shock absorption to reduce the load on the joints when jumping.

A basketball game consists of four parts, called quarters. In the North American professional league NBA, the quarters are each twelve minutes long, but in other leagues, they sometimes only last ten minutes.

In basketball, however, only the actual time of the playing is counted. There are numerous interruptions during which the clock is stopped. Including the interruptions, a basketball game actually takes about 80 to 100 minutes.

If the score is tied at the end of the last quarter, the game is extended by five minutes (overtime). There will be as many overtimes played until one team has more points and becomes the winner.

Two basketball teams meet, each consisting of five players present on the field and seven substitutes. Each of the five field players has a position with a specific area of responsibility.

The player positions in basketball are:

In principle, other combinations of player positions are also possible. For example, some teams use three guards or two centers. 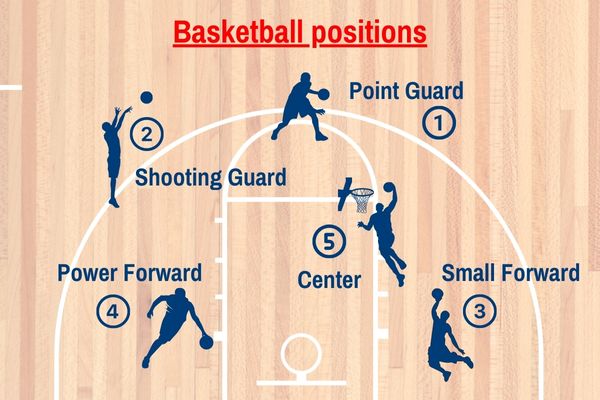 In professional leagues such as the NBA and international competitions, usually, three referees are used. In smaller leagues, there are mostly two referees on the court. They are assigned to different areas of observation. In addition to the referees, a basketball game is also overseen by the Replay Center, which stops times and records fouls.

The goal of the attacking team is to place the ball in the opponent's basket. The defending team seeks to prevent the attackers from doing and to win the ball so that they can proceed to the attack themselves. A basketball game consists of the following moves:

The attacking team moves towards the opponent's basket and has the opportunity to score points. To advance the ball, the attackers can choose from three possible actions.

Basketball is a very fast sport. The attacking players have little time to complete their moves. If they do not comply with the time limits, the play is stopped, and the opposing team is allowed to throw the ball in from the sidelines.

These time limits exist in basketball:

In addition to the various timeouts, there are a number of other rule violations in basketball that must be avoided:

In basketball, there are personal, technical, unsportsmanlike, and disqualifying fouls. They are caused by errors of substitution (e.g., too many players on the court at the same time), violent complaining, insulting, disturbing the opponent, or gross unsportsmanlike conduct (e.g., risking injury to the opponent).

One disqualifying foul, two unsportsmanlike fouls, or five (six in the NBA) personal or technical fouls will result in a player or coach being excluded from the current match. He must then leave the arena immediately. However, this is a personal penalty. Another player may be substituted, as there must always be five people per team on the court.

In basketball, up to three points are awarded when a shot is successfully placed in the basket. The number of points scored depends on the position from which the ball is thrown into the basket.

Points are awarded for successful hits after the following moves:

The team that has scored the most points at the end of the game time is the winner of the basketball match. 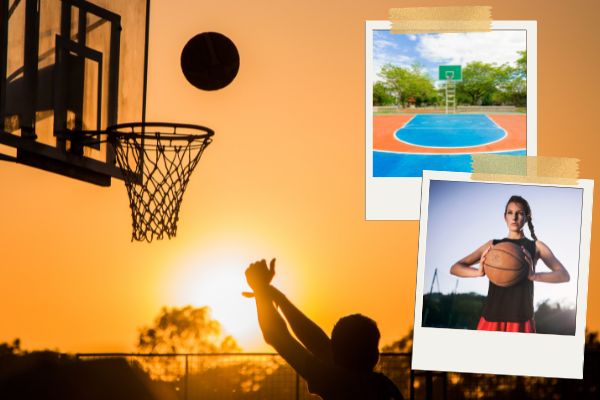 Professional basketball in the USA

Basketball is one of the "Big 4" American sports, along with American football, baseball, and ice hockey. The popular ball game is played in the USA at schools, colleges, universities, and on public basketball courts outdoors. The best players are signed to the NBA.

The North American professional league NBA is considered the strongest basketball league in the world. It is the ultimate goal of basketball players' careers not only in the US but also for talented players from all over the world.

A total of 30 teams compete for the NBA crown. They are divided into two conferences, East and West, which in turn are divided into three divisions each. Five teams play in each division, which is each assigned to a geographic region: Atlantic, Central, Northwest, Pacific, Southeast, and Southwest.

The teams play permanently in the NBA; there is no promotion or relegation. However, it is possible that clubs move to another city, thus changing the composition of the divisions.

The most successful teams in the North American professional basketball league NBA to date are:

The NBA season begins in October with the regular season and ends in June with the playoffs.

After the end of the regular season in April, the strongest teams of the season meet in the playoffs. The eight best teams from each conference qualify. The playoffs are played in a knockout system and as a best-of-seven series. The teams play a maximum of seven games against each other. The first team to win four games advances to the next round.

A highlight for all basketball fans is the annual NBA All-Star Game, for which league play is interrupted in February. The best players from the Eastern Conference and Western Conference compete against each other. Most of the All-Star starters and the captains of the conferences are selected in advance via online voting by sports fans from the USA and Canada. The NBA coaches also select a few more All-Star players.

As an aspiring basketball fan, you should know the most talented players in the history of the sport. These five professional basketball players are legendary:

Your thirst for knowledge about basketball is not yet satisfied? You probably didn't know these exciting facts yet:

You have caught the basketball bug and don't want to miss a single game? The encounters of the North American professional league NBA will be streamed live to your home via various streaming providers.

Streaming via the NBA webseite

You can stream the regular season games and the play-offs live via the NBA’s official website. Choose between a classic League Pass for $ 14.99 per month and a League Pass Premium for $ 29.99, which allows you to stream on two devices at the same time. In addition to the games, the NBA website always offers you the latest basketball news and exciting background reports.

DAZN broadcasts 182 matches of the regular season and at least one play-off match per matchday live. In the USA, you can access the world of sports on DAZN with an annual subscription for $ 149.99 ($ 12.50 per month) or a monthly subscription for $ 19.99.

On the next TV night with your friends, do you want to cheer for your favorite team in the appropriate jersey? We recommend the following online stores to supply you with NBA merchandise:

The 30 teams in the six NBA divisions are located all across the United States and Canada. So no matter which part of the USA your next trip takes you to, you'll find an exciting NBA game nearby!

Book a cheap flight, reserve your ticket on Ticketmaster, apply for your ESTA, and off you go to the land of unlimited sports opportunities!

Do you want to dive deeper into the world of US sports? Then check out our articles on American football, baseball, and ice hockey.