Top universities, beautiful coastlines, exciting history, and the vibrant metropolis of Boston - come with us to the fascinating Bay State, where the first European settlers once set foot on American soil.

Geographically, Massachusetts is a rather small state: a roughly 2-hour drive is enough to cross the entire state from the coast to its western border. Five other states border Massachusetts: New Hampshire and Vermont to the north, New York to the west, and Connecticut and Rhode Island to the south. Along the eastern border stretches the Atlantic coastline, which is more than 2,400 km long.

Massachusetts, like most New England states, is densely populated. The largest cluster lies in the eastern part of the state around Boston, forming the tenth-largest metropolitan area in the United States. The Boston area is also part of the Boswash megalopolis, which stretches from Boston through New York City and Philadelphia to Washington D.C..

Massachusetts residents are also known as "Bay Staters," derived from the state's nickname.

The largest cities in Massachusetts

Besides the metropolis of Boston, populous Massachusetts has other major cities to offer. Based on population, the largest cities in the Bay State are:

The US state of Massachusetts has a little bit of everything: long beaches on the Atlantic coast and the islands of Martha's Vineyard and Nantucket, urban regions in the Boston area, farmland in central Massachusetts, and the Berkshire Mountains in the west.

The American Northeast, which includes the state of Massachusetts, is perfect for those who like different seasons. There are still variations depending on which part of the Bay State you are in. Eastern Massachusetts has a maritime climate due to Atlantic influences: summers are warm, and winters are mild. The further inland you go toward the mountains, the more severe the winters can be.

Best time to travel to Massachusetts

The best time in Massachusetts is from June to September when the thermometer climbs highest. You can even enjoy nine hours of sunshine in June and July.

The summer months are perfect for summer vacations on the shores of the Cape Cod Peninsula or the islands of Martha's Vineyard and Nantucket. Let a fresh breeze blow in your face as you head out to explore charming fishing towns and secluded lighthouses.

Just before the onset of winter, the landscapes of America's northern states turn into a spectacular sea of color! In Massachusetts, the Indian Summer foliage is at its most magnificent in late October – so always have a camera handy during your hikes!

Many well-known airlines from Europe land at the Boston hub, including Lufthansa, British Airways, Air France and KLM. You can book direct flights to Boston with Lufthansa from Frankfurt am Main or Virgin Atlantic from Paris Charles de Gaulle. Japan Airlines or American Airlines will take you directly from Tokyo to Boston.

Plan on around €700 to €800 for your flights between Frankfurt am Main and Boston. With Virgin Atlantic, you can even get a direct flight from Paris Charles de Gaulle Airport to Boston for €500.

If you fly with a direct flight of Japan Airlines or American Airlines from Tokyo to Boston, you have to dig deeper into your pocket. The airfare here is around €1,300 to €1,400. However, if you accept a stopover in Toronto, you have considerable savings potential with Canadian Airlines. The connection with a stopover will cost you around €600 to €700.

If you are not a Green Card holder or a US citizen, you will need a US visa or an ESTA travel authorization. You can apply for the latter if you are a citizen of one of the Visa Waiver Program countries (e.g., Japan, Australia, and most EU countries). ESTA offers you advantages such as a short processing time, comparatively low costs, and the possibility to stay visa-free in the USA for up to 90 days.

Boston Airport is located only about three kilometers east of the city center. To cover the short distance, you have the following transfer options:

Cabs are available at Boston Airport at every terminal except Terminal C on the arrivals level.

Enjoy a 7 day vacation in Boston

CURRENT DEAL OF OUR PARTNER HOTWIRE 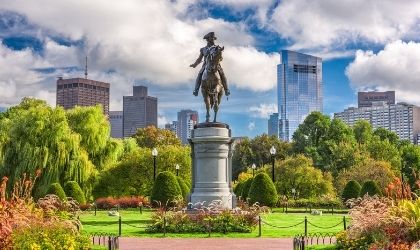 Coast or mountains? In the US state of Massachusetts, both are equally beautiful! Be sure to add these three highlights to your travel list:

The beaches of Cape Cod National Seashore stretch for 64 km along the peninsula of the same name in southeastern Massachusetts. Here, you can not only swim and sunbathe but also take a lighthouse hike and explore the charming seaside towns to soak up the typical New England flair.

In Mount Greylock Park in the Berkshire Mountains, you can climb the highest mountain in Massachusetts, Mount Greylock. Once you've reached 1,064 m, you'll see the Veterans War Memorial Tower, whose architecture is reminiscent of a lighthouse. From up here, you can see almost 150 km into the distance! If you come up here in winter, you will experience the high season for snowmobiling and cross-country skiing.

The picturesque Halibut Point State Park is located on the coast near Rockport. On a clear day, you can gaze out over the ocean and spot faraway destinations like the Isles of Shoals in New Hampshire and Mount Agamenticus in Maine. If you're looking for a change from swimming, picnicking, and hiking, explore the tide pools at Halibut Point State Park or take a tour of the granite quarry.

You'll find most of Massachusetts' top sights in Boston, the Bay State's cultural and economic center.

In the densely populated US state of Massachusetts, you don't have to look far for exciting city highlights. A visit to these four cities is especially worthwhile if you are traveling in the Bay State.

Boston is not only the largest city but the heart of Massachusetts. The fascinating mix of old and new will captivate you as much as the many museums and cultural highlights. Life in Boston is especially vibrant in the many galleries, sidewalk cafes, and boutiques around Newbury Street.

These city highlights are waiting for you in Boston:

Springfield, Massachusetts, is best known as the birthplace of the sport of basketball. It was invented here in 1891 by physical education teacher James Naismith.

If basketball is your thing, you can immerse yourself in the world of this American national sport at the Springfield Basketball Hall of Fame.

Be impressed by these city highlights in Springfield:

In the city of Cambridge, near Boston, you will find the oldest and most prestigious American university: Harvard was founded here in 1636. When in Cambridge, be sure to take a tour of the university and soak up the unique atmosphere of this venerable institution.

These are the must-see highlights of Cambridge:

The port town of Gloucester on the coast of Cape Ann is small but interesting. It has been an active fishing port since colonial times, and you can participate in a variety of marine activities, including schooner sailing, deep-sea fishing, and whale watching. You can then sample freshly caught delicacies on a foodie tour.

These city highlights should be on your travel bucket list in Gloucester:

Massachusetts is packed with history! No wonder because the first European settlers who came to America on sailing ships landed on the coast of the Bay State. Our road trip through Massachusetts takes us to the most exciting historical highlights:

At the Plimoth Patuxet Open Air Museum, you can experience firsthand how the Pilgrim Fathers of Plymouth lived. Make yourself comfortable in the huts of the faithfully recreated settlement or listen to the stories of the costumed guides who tell of the adventures of the first Europeans in America.

The small port town of Salem near Boston gained worldwide fame through the witch trials at the end of the 17th century. Today, you can trace this dark chapter of American history in sights like the Salem Witch Museum, the Salem Witch House, or the Salem Witch Trials Memorial.

The Freedom Trail takes you across Boston to a total of 17 historically significant landmarks. As you walk along it, you'll come to the Massachusetts State House, the Old State House, King's Chapel, and the USS Constitution, among others.

Massachusetts is so fascinating that your friends and followers will want to share your experiences, too! For beautiful photo opportunities in the Bay State, check out these five places:

Since Massachusetts is a state that traditionally has a lot of fishing, you'll find plenty of fish dishes on the menus of regional restaurants. Be sure to try the Massachusetts state fish, cod. Also typical for Massachusetts are:

You probably haven't heard these exciting facts about the US state of Massachusetts:

Are you so taken with the quintessential New England charm of Massachusetts that you want to stay? Then the following tips will certainly be helpful for you.

Massachusetts is among the wealthiest US states. The Bay State is an important center for commerce and the financial sector.

There are also many jobs in industries such as engineering, sea fishing, electrical and metal industry, textile industry, and food industry.

If you're an academic, professor, or researcher, Boston's dense network of universities and colleges offers excellent career opportunities.

As many opportunities as Massachusetts offers, life here has its price. The state is around 27% above the American average.

The Cost of Living Index for the city of Boston is as much as 62% higher and 82% higher in the university city of Cambridge.

To Massachusetts with a Green Card

If you want to immigrate to Massachusetts, you should apply for a Green Card. Only with this Permanent Resident Card for the USA you can live and work anywhere and for an unlimited period in America.

The quickest and least complicated way to obtain a Green Card is to participate in the Green Card Lottery, in which the U.S. Department of State draws 55,000 tickets annually.