The history of immigration to the USA

The history of the USA is characterized by the immigration of people from many cultures, who shaped the country and still make it successful today. However, the initially uncontrolled flow of immigrants has turned into a complex system that demands a lot from US immigrants.

Why does everyone want to go to the USA?

No other country in the world has been shaped and advanced as successfully by its immigrants as the United States. But why are millions of people drawn to the US every year? The answer to this question varies greatly depending on the group of people you're asking.

For the first settlers, America was the great free country to fulfill their dreams. For the politically and religiously persecuted, the United States has always been a safe haven. In modern times, however, the dream of freedom and unlimited opportunity is the most common immigration reason for American residents.

The US has held first place of the most popular emigration countries for centuries and is both a place for longing and a dream factory. The American wealth of ideas, the great opportunities for advancement, and the characteristic team spirit of the USA hold almost magical power.

Nationalities of US immigrants

To date, immigrant groups from Latin America hold the undefeated No. 1 spot in the US immigration rankings. Asians have been in second place for many years, closely followed by Europeans.

Immigration development in the USA

Since the discovery of the United States of America, there have always been large waves of immigration. The first American census in 1850 already revealed an immigrant share of 10%. In 2021, this share is about 13.7 %.

Immigration to the USA in colonial times

After Columbus "discovered" America in 1492, European immigrants began to arrive in the United States. At that time, there were three major groups that settled in the colonial areas:

By the early 20th century, other Europeans had joined them, including the Dutch and the Scots.

The flow of immigrants did not decrease until the end of the 18th century. For example, during the first half of the 19th century, 500,000 Germans came to the United States. The failure of the Revolution was the decisive reason for many to leave their homeland.

The next wave of immigration then swept into the USA between 1845 and 1849, with millions of Irish coming to North America fleeing famine in their homeland. 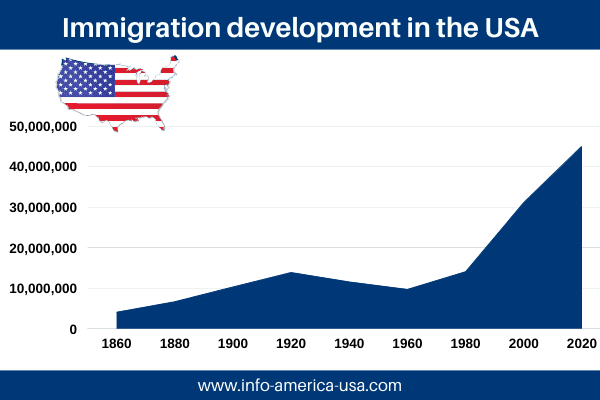 Immigration to the USA from 1924

Until the 1920s, there was strong immigration, especially from Europe. The "Emergency Quota Act" of 1921 imposed quotas on immigration to the United States for the first time, followed by the "Immigration Act" in 1924.

The first visa categories in the USA

In 1940, people without US citizenship had to officially register for the first time if they wanted to travel to the USA. They were divided into three categories:

The group of US immigrants already received a so-called "Alien Registration Card" at that time. It was first printed on green paper in 1950, which gave rise to the term "Green Card." From then on, every legal immigrant had to be able to show proof of this document.

Since the 1970s, the number of immigrants has increased massively, mainly due to huge influxes from Latin America and Asia. Since 1978, the USA has therefore set fixed quotas in its immigration policy.

In 1994, the so-called Green Card Lottery, whose official name is Diversity Immigrant Visa (DV) Program, was implemented for the first time. To this day, 55,000 Green Cards are drawn at random each year and issued to participants from all over the world.

The alternative paths to US immigration, such as Green Cards through a workplace or family reunification, are reserved for a lucky few.

Immigration situation in the USA since 2005

Since 2005, a new law has been in effect in the USA for identification documents, driver's licenses, and various immigration issues, which was introduced in the wake of the attacks of September 11th, 2001. The so-called "Real ID Act" brought about the following changes, among others:

Because the Real ID Act was not met with only approval, large demonstrations took place in many US states in 2006, with immigrants, US citizens, and human rights and labor organizations fighting for better immigration laws.

Despite the recurring turmoil in immigration law, the number of US immigrants is steadily increasing. This includes those who are in the USA illegally without valid documentation. To date, they make up about 5 percent of the US population.

The ongoing fight for tougher immigration laws also put President Barack Obama on the map. During his time in office, he wanted to create a better future for the children of illegal immigrants (also known as "Dreamers") and launched the Deferred Action for Childhood Arrivals program (DACA) in 2012.

DACA provides for children and youth who were under the age of 16 when they entered the country to receive a residency permit and an education, even though they do not have valid documentation. In addition, they can also apply for a work permit after graduation.

On September 5th, 2017, Donald Trump ordered the termination of the DACA program, which meant imminent deportation for about 800,000 participants. Years of court cases followed to determine whether Trump's decision was motivated by racism.

In 2020, the U.S. Supreme Court eventually ruled that it was "arbitrary and capricious" to suspend the DACA program. The "Dreamers" were saved from deportation.

American Dream and Promise Act of 2021

In 2021, the U.S. House of Representatives passed a bill that would give "Dreamers" a path to US citizenship. According to the Migration Policy Institute (MPI), the "American Dream and Promise Act of 2021" would allow 4.4 million immigrants to initially obtain the right to a Green Card and later apply for naturalization.

Despite his attempts to mess with the American dream, Donald Trump's efforts to tighten immigration law have been largely unsuccessful. In fact, under his successor, Joe Biden, America could do even more for its immigrants.

In addition to simplifying naturalization for undocumented immigrants, President Biden is also considering reform legislation to increase the number of Green Cards given out annually in the Green Card Lottery from 55,000 to 80,000. The questions on the US naturalization test, which were made considerably more difficult by Donald Trump, were also immediately abolished.

From US immigrant to US citizenship

Over the past decade, between 700,000 and 850,000 immigrants received US citizenship each year. Although you get almost all the rights of a US citizen with the Green Card, the final naturalization is an accolade for most immigrants. A

US passport is not mandatory to live and work in the States. Millions of US immigrants are happy with their Green Card and lead a carefree and successful life in the United States.

Living and working in the USA

If you want to live and work in the USA permanently, you first need a Green Card. The easiest way to get a US immigrant visa is through the annual Green Card Lottery. Each year, the US government gives away 55,000 Green Cards to participants from all over the world.

It only takes a few minutes to register for the lottery - want to try your luck?