If you want to apply for a driver's license in the USA, the pitfalls of the federal system of the United States reveal themselves very clearly. Each state has its own authorities, regulations, and deadlines. We shed a little light on the subject of American driver's licenses.

US driver's license for immigrants

If you are planning to move your life to the USA, the American driver's license is one of the documents that you should definitely try to get as soon as possible. There are a few things to keep in mind:

The agency responsible for issuing an American driver's license is the Department of Motor Vehicles (DMV). However, there is no nationwide authority. Each of the 50 US states has its own DMV, which in turn sets different rules, requirements, and deadlines.

Check out the Nevada DMV website for a comprehensive overview ofthe DMVs of all 50 states.

Good to know
As an immigrant, it is advisable to apply for an American driver's license as soon as possible – even if you don't want to buy a car right away.

The American driver's license not only entitles you to drive a vehicle but also serves as an identity card. Therefore, having a driver's license makes it easier for you to deal with various authorities, take out insurance or get credit approved, among other things.

Since there are no ID cards in the USA, you can – if you do not yet have a driver's license – obtain an ID card from your local DMV, which fulfills the ID card function only.

Exchanging a driver's license as an immigrant

If you have a driver's license from your home country, it is usually valid for some time but must be exchanged for an American driver's license in the USA. The regulations for this vary depending on your state of residence and country of origin.

Many countries, e.g., Germany, have concluded agreements with the individual US states which define the exact periods and provisions for the exchange of the driver's license. For example, the German driver's license remains valid in most US states for a period of up to one year.

The exchange of the driver's license itself is done in line with regulations that vary greatly from state to state. In some states, the driver's license is merely re-written. Many states require a vision test, and some also demand a successfully passed theory test. In some cases, a practical driving test must also be taken.

The requirements are particularly strict in California and New York State, for example. In Texas, however, the process of exchanging a driver's license is relatively straightforward and does not involve any major hurdles.

By the way, the categories of driver's licenses in the USA are not uniform either. They are defined and named differently depending on the state.

US states that don’t require a test

US states that require a theoretical test

Turning in the old driver's license 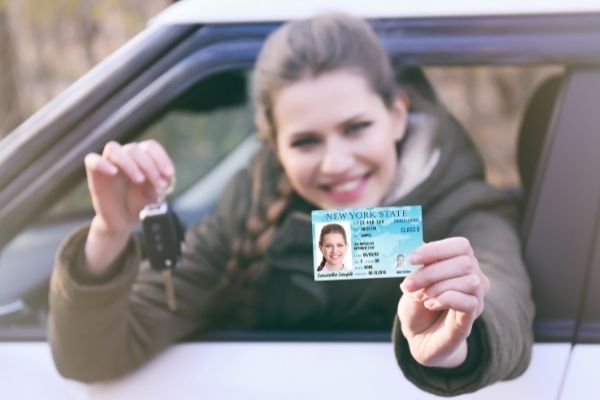 Driver’s license in the USA vacation

Driving along the endless highways of the United States passing through spectacular landscapes – that's how many USA travelers imagine boundless freedom! Here's what you need to know before you start planning your trip:

Rental car in the USA

A rental car offers many advantages on vacation in America. It allows you to stay flexible and independent and discover the land of opportunity on a road trip, for example. However, a rental car is not only practical for long distances in the USA. Even in cities like Los Angeles, we recommend renting a car, because public transport is not so well developed and the distances are very long.

Prices for rental cars vary greatly depending on the car rental company and the type of car you are looking for. However, you can usually save money by booking your car online in advance. With many airlines, you can also take advantage of "Fly & Drive" offers.

When looking for a suitable rental car, you should generally ask yourself the following questions:

Attention
With most car rental companies, you must have and deposit a credit card to reserve a vehicle!

The international driver's license is basically a translation of the driver's license from your home country. It helps police and car rental companies in your vacation country to check whether you are authorized to drive a vehicle.

Therefore, you should find out in good time before your journey to the USA whether an international driver's license is mandatory in the states in which you would like to drive a rental car. Otherwise, you may not be provided with a vehicle, or you may be fined.

Please consult the websites of the relevant DMVs to find out which specific documents you will need for your trip.

The regulations surrounding the American driver's license are not the only things that differ from state to state. The development of roads and various traffic regulations are also a matter for each state in the USA! You can find out everything you need to know in our guide to driving in the USA.