Do you want to impress your loved ones under the Christmas tree with your knowledge about the holiday season in America? In this article, you will learn everything you need to know, but also some fun facts about Christmas in the USA.

The time before Christmas

US citizens are eagerly awaiting the holidays weeks before the event: with lavish decorations, hearty food, and, of course, the American's favorite hobby during Christmas time, Christmas shopping. Of course, they remain true to their all-time favorite motto – BIGGER IS BETTER!

Since people in the USA usually prefer to go big, glittering lights not only illuminate busy streets and shopping malls. Houses and front-yards are sometimes transformed into true Christmas wonder worlds full of flashing lights, artificial snow, Santa Clauses, and reindeer sleighs. The biggest Christmas lovers among the Americans even pay electricity bills of several thousand dollars for their passion.

The joy of decorating does not stop at the doorstep but also brings a festive atmosphere to the interior of American homes. The Christmas tree is the centerpiece, of course.“Elf on the shelf", an about 20 cm tall flexible doll, is very popular with families: the little fellow moves into American living rooms at the end of November to observe and report to Santa Claus whether the children were well-behaved.

America's best-known Christmas decorations attract around 125 million people to the Rockefeller Center in New York City every year. The tradition dates back to 1931 when construction workers first set up a small, decorated tree on the building-ground. Today, the Rockefeller Center Christmas Tree usually measures a whopping 20 to 30 meters and is adorned by more than 25,000 glittering lights. In addition, breathtaking XXL Christmas decorations and an ice skating rink will get you in the right mood to buy gifts for your loved ones. 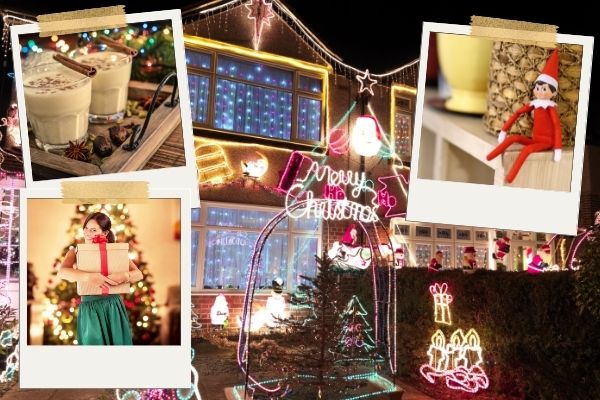 When it's cold outside and the lights of the Christmas tree flicker inside, many Americans like to make themselves comfortable on the sofa and watch one of the traditional Christmas movies on TV. Classics such as Charles Dickens' "A Christmas Carol" (1938), "It's a Wonderful Life" (1938) or "Miracle on 34th Street" (1947) are as much a part of an American holiday season as humorous comedies such as "The Grinch" (2000), "Kevin Alone at Home" (1990), "Elf" (2003) or National Lampoon's "Christmas Vacation" (1989).

Of course, the holiday season also includes the Christmas sounds. Songs like "Last Christmas" by Wham!, "All I Want for Christmas Is You" by Mariah Carey, or "Rockin' Around the Christmas Tree" by Brenda Lee can be heard all December long, from the morning drive to work to do shopping in the evening. By the way, the best-selling Christmas song of all time is Bing Crosby's White Christmas, which has sold over 50 million copies worldwide since 1947.

Shining lights and the scent of mulled wine - a visit to the Christmas market is a particularly pleasant way to get into a festive mood. The tradition of Christmas markets, which originated in the German-speaking part of Europe, is becoming increasingly popular in the USA as well. 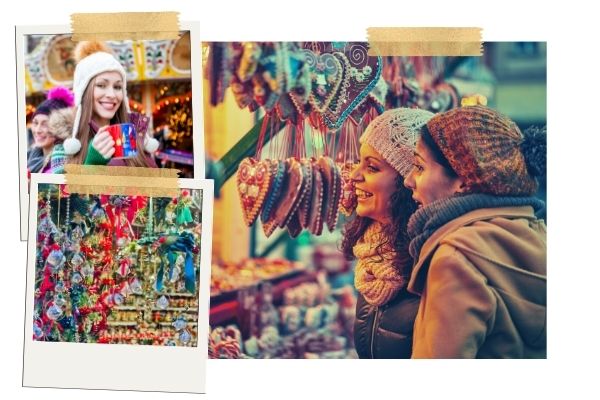 All of this is not festive enough for you? You can always get more! Some American cities have turned into true Christmas towns where you'll feel like you've stepped through a magical portal and come out inside a snow globe ...

The Christmas celebration in the USA

In the United States, as all over the world, the holiday season brings the family together. Everyone enjoys a Christmas dinner together, listens to festive music, and gives each other gifts. What is different about Christmas in America? Here is a short overview:

The person responsible for gifts in America is Santa Claus. In the night from December 24th to 25th, he comes flying with his reindeer sleigh, slides through the chimney, and loads the Christmassy decorated living room with presents. A nice story, but where do American Christmas legends actually come from? That is behind the stories of the different characters:

In the United States, it is a wonderful tradition to send greeting cards to family and friends. Many Americans also take an annual Christmas photo of the whole family and print it on a personalized Christmas greeting card. Between Thanksgiving and New Year alone, the U.S. Postal Service delivers approximately 15 billion letters and cards, plus some 910 million parcels.

By the way, children can write to Santa Claus before the feast and tell him their Christmas wishes by sending a letter to the postal code H0H0H0. The letters are even answered by employees of the Canadian postal service.

The traditional Christmas dinner in the USA is served with dishes similar to those of the Thanksgiving feast. Turkey, baked ham, and all kinds of side dishes fill the stomachs of an American Christmas party, as do the cookies, cakes, and desserts afterwards. Americans also love eggnog, a drink prepared with rum, brandy, or whiskey. 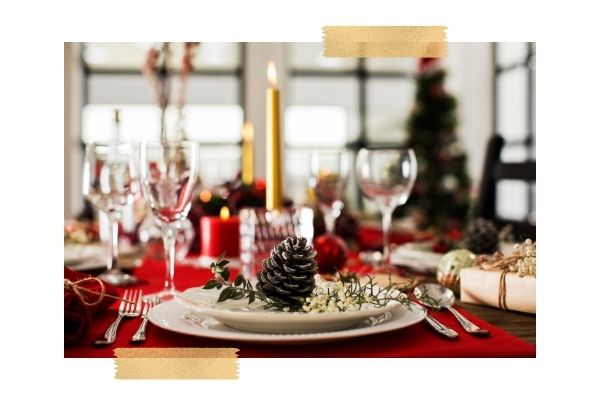 In the United States, people gather on December 24th in church or for dinner in convivial company. However, they really get going with their Christmas party only on December 25th. On the morning of the traditional Christmas Day, everyone goes together to unwrap presents.

Another American tradition is for children to hang socks by the fireplace, which they will find stuffed with sweets and small gifts on Christmas Day. As a small token of appreciation for his efforts during Christmas night, milk and cookies are placed near the fireplace for Santa Claus in return.

You can't get enough gifts? Here are a few interesting facts about them:

You just can't get enough of Christmas? Here are a few interesting facts about the holiday season:

We wish you a merry and relaxing Christmas!