Four gigantic presidential heads in the pristine landscape of the Black Hills: Mount Rushmore National Memorial is undoubtedly one of the most impressive sights in the USA. Follow us to South Dakota and learn all the secrets of this special mountain.

What is Mount Rushmore?

Mount Rushmore National Memorial is a national monument located in Pennington County, South Dakota. The famous mountain is carved with 18-meter-high presidential portraits. They depict the four US presidents who were considered most significant at the time of construction: George Washington, Thomas Jefferson, Abraham Lincoln, and Theodore Roosevelt.

Mount Rushmore, also known today as the Shrine of Democracy, is not only an important monument in more recent American history but also a sacred site for the Lakota Sioux tribe.

The history of Mount Rushmore

In 1923, the idea to build Mount Rushmore first emerged from historian Doane Robinson, who was looking for ways to bring more tourists to South Dakota. A year later, sculptor John Gutzon de la Mothe Borglum traveled to the region to carry out the project.

Originally, the presidential heads were to be made on the granite pillars known as Needles in the Black Hills. However, Borglum judged the rocks to be too thin, so the mountain now known as Mount Rushmore was chosen.

The monument was not without controversy: for the local Native Americans, the Lakota Sioux, the mountain was a sacred place called "Tȟuŋkášila Šákpe" ("Six Grandfathers"). The construction of Mount Rushmore was considered by the Indians as a desecration of the mountain.

After long negotiations and the support of President Calvin Coolidge, Congress gave the green light for the construction project on March 3rd, 1925.

In October 1927, about 400 workers began building Mount Rushmore. The first person to be blasted and chiseled into the mountain was George Washington. Thomas Jefferson and Abraham Lincoln followed. Finally, the face of Theodore Roosevelt was created in the niche of the mountain. On October 31st, 1941, the Mount Rushmore National Memorial was officially completed.

You'll find Mount Rushmore National Memorial in the southwest corner of South Dakota near the town of Keystone in Pennington County.

Most visitors to Mount Rushmore National Memorial travel in their own vehicles via South Dakota Highway 244, which runs near the memorial. There is plenty of parking for cars, buses, campers, and motorcycles on site.

The closest airport to Mount Rushmore is Rapid City Regional Airport, about 56 km away.

If you are not a US citizen or green card holder, you will need a US visa or ESTA to enter the United States.

There is a lot to discover in the area in front of Mount Rushmore, including these highlights:

From the Grand View Terrace, you will definitely have the best view of the mountain! Here, you can also use free telescopes to see every detail of the presidential portraits. Of course, the platform is also a great place to take memorable photos.

Avenue of the Flags

The Avenue of the Flags is the main walkway on the grounds. It leads straight to the Grand View Terrace and is flanked by columns with the flags of the states and territories of the USA.

The trail called Presidential Trail starts at Grand View Terrace and goes around the mountain for about 800 m. It takes you up some stairs and brings you to other viewpoints, from which you can look at the presidents from other perspectives.

Below the Grand View Terrace, you will find the Lincoln Borglum Visitor Center, the museum, the amphitheater, and a bookstore. Here you can learn about the history and construction of Mount Rushmore. Take some time to watch the documentary "Mount Rushmore: The Shrine" and look at Borglum's designs as well as original tools from the construction site.

If you want to learn more about Mount Rushmore on a tour, you have two options:

During the summer months, you can take part in free tours led by the park rangers. These last about half an hour and will give you interesting insights into the history of the monument and the surrounding nature.

You can also explore the site on your own. Audio and multimedia guides are available in English, Spanish, French, German, and Lakota. They are available for rent at the Information Center for $6.

You should definitely take many photos of a structure as extraordinary as Mount Rushmore. These are the best places to capture the presidential heads:

Many exciting stories are connected to Mount Rushmore, and there are always speculations. Did you already know the following interesting facts about the four oversized presidential heads?

Doane Robinson's first idea for Mount Rushmore did not foresee presidential heads but images of famous figures from the American West. Explorers Lewis and Clark and their tour guide Sacagawea, the influential Indian chiefs Red Cloud and Crazy Horse, and the bison hunter William "Buffalo Bill" Cody were to be carved into the stone. Sculptor Gutzon Borglum was responsible for carving presidents into stone instead of Western heroes.

The four presidents at Mount Rushmore were chosen because they made significant contributions to the founding, expansion, and unification of the United States. George Washington, the first US president, was the founding father of the nation. Thomas Jefferson drafted the Declaration of Independence and signed the Louisiana Purchase. Abraham Lincoln led the USA through the Civil War, and Theodore Roosevelt represents the country's industrial boom. 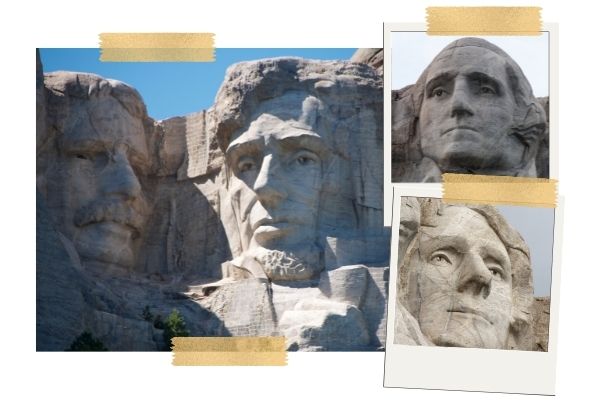 The portrait of Thomas Jefferson was actually to be created to the right of George Washington. However, during the work, it turned out that the rock was unsuitable. The head that had already been started was blown up, and a new Jefferson figure was created on the left side.

The sculptor Borglum died before the monument was completed. His son Lincoln followed in his footsteps and continued the project. According to Gutzon Borglum's designs, the presidents were to be depicted up to waist height. However, due to a lack of money, the planned elaboration of the torsos was no longer implemented, and the project was terminated after the portraits were completed.

The Hall of Records

Behind the faces lies the Hall of Records, a chamber approximately 30 m x 24 m in size. Architect Borglum planned to store here, among other things, documents and artifacts related to US history, as well as busts of important Americans. In addition, a huge bronze eagle was to be placed above the entrance door. Again, the lack of money toward the end of construction meant that work on the Hall of Records was not completed.

It was not until 1998 that the chamber received new attention. As a result, it was equipped with a titanium safe, which in turn contains a chest made of teak. The chest holds 16 enameled porcelain plaques describing the construction of Mount Rushmore, the four presidents depicted, and American history.

There is often speculation about the addition of a fifth head to Mount Rushmore. In fact, there were already thoughts about this during the construction phase. A bill to add a portrait of women's rights activist Susan B. Anthony failed in Congress in 1937.

According to a 2018 New York Times poll, Franklin D. Roosevelt is the most popular choice for a fifth head on Mount Rushmore. Presidents John F. Kennedy and Ronald Reagan are also brought up often.

However, the project manager of a possible future addition would have to get creative: after an investigation carried out in 1989, the engineering firm RESPEC concluded that the rock's stability was probably insufficient for further sculpting.

Want some more "non-essential knowledge" about Mount Rushmore? With these exciting facts, you will entertain your travel companion:

About 14 km southwest of Mount Rushmore National Memorial, another monumental figure was carved into the rock: the Crazy Horse Memorial. The portrait of the Oglala Lakota chief Crazy Horse is, so to speak, a counterpart to Mount Rushmore and is visited by about one million people per year.

The figure was commissioned in the 1940s by Sioux Chief Henry Standing Bear. The latter was disappointed that only US.presidents were to be depicted on Mount Rushmore. Korczak Ziolkowski, who was already involved in the work on Mount Rushmore, was hired as a sculptor. After his death in 1982, his children continued the project.

Since the Crazy Horse Memorial is not financed by government funds but by a foundation, the work is progressing rather slowly. Since 1998, only the face has been completed. The finished sculpture, however, will show Crazy Horse sitting on a horse and will be 195 m long and 172 m high. Presumably, it will take another 100 years until the sculpture will be finished.

Do you still need some organizational information for a smooth visit to Mount Rushmore National Memorial? Then you will surely find the answers to your questions in our FAQ:

What are the opening hours of Mount Rushmore?

When is Mount Rushmore illuminated?

How much is the entrance fee at Mount Rushmore?

Admission to Mount Rushmore National Memorial is free. However, you have to pay fees for the use of the parking lots.

What does a parking ticket at Mount Rushmore cost?

You pay a parking fee of $10 per car, motorcycle, or RV per day. Seniors age 62 and older and military personnel can park their vehicles at a discounted rate of $5. Tour buses pay between $25 and $50. Parking fees can be paid by cash or credit card. Reservations are not required.

Can I bring my pet onto the Mount Rushmore grounds?

Due to alarge number of visitors at Mount Rushmore, pets are only allowed in a few areas and must be kept on a leash. You will find these areas around the parking lots. You may also walk your pet on a leash on the Blackberry Trail directly across from South Dakota Highway 244. Exceptions are made for guide dogs and service dogs: they may accompany visitors with disabilities in all publicly accessible areas.

What is the best time to visit Mount Rushmore?

The busiest months at Mount Rushmore are June, July, and August. In May, September, and October, it is a bit quieter, and the weather offers good conditions for sightseeing.

How long does it take to visit Mount Rushmore?

You should plan about two to four hours for a tour of Mount Rushmore, the associated exhibits, and a walk on the Presidential Trail.

Where can I go to eat at Mount Rushmore?

There is only one restaurant at Mount Rushmore: Carver's Marketplace. It's open daily from 8 am to 9 pm and has a large indoor and outdoor seating area. But beware: If you want to enjoy your bison burger at Carver's Marketplace during the peak summer season, expect to wait for a seat.

Can I stay overnight at Mount Rushmore?

No, there are no hotels in the immediate vicinity of the mountain, and the area is only accessible until 9 pm.

The United States is full of unique buildings and superlatives that you can discover after your visit to Mount Rushmore. How about a sightseeing tour of the most beautiful attractions in New York City? Here, the Statue of Liberty welcomes you to America and the legendary Empire State Building awaits you with a huge dose of nostalgia. Or are you more drawn to the West Coast? The attractions of San Francisco will also impress you. Drive across the world-famous Golden Gate Bridge or explore the history of Alcatraz.

We wish you a wonderful journey through the USA!