The climate zones in the USA

The climates of the USA are a diverse mosaic that includes every imaginable weather condition – from freezing cold to tropical hot, from bone-dry to abundant in rainfall. Follow us to the United States and be impressed by its remarkable climatic diversity. 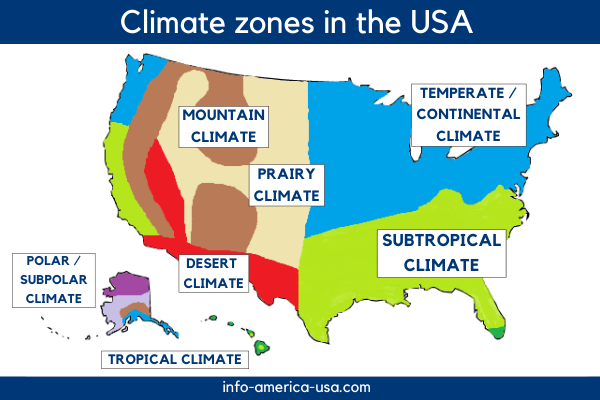 Diversity of climate zones in the USA

In terms of area, the United States is the fourth largest country in the world. The huge landmass of the USA stretches across the North American continent and is framed by two major seas, the Atlantic Ocean in the East and the Pacific Ocean in the West. In the Rocky Mountains, some of the highest peaks in America rise skyward.

The size and the varied relief of the United States provide for a wide range of climatic zones and very high temperature fluctuations in some regions. There is a suitable climate zone for every weather preference in the USA: temperate regions with four seasons, continental regions with large temperature differences between summer and winter, and tropical regions where the sun shines all year round. 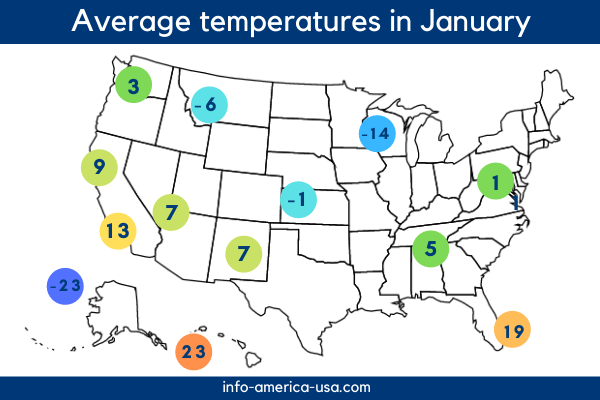 The coastal regions are influenced by the oceans and therefore have relatively small annual temperature variations. The further inland a region lies, the greater the differences between seasons. The West and Midwest of the US experience the greatest extremes, as the Rocky Mountains block wind and rainfall coming from the Pacific Ocean. 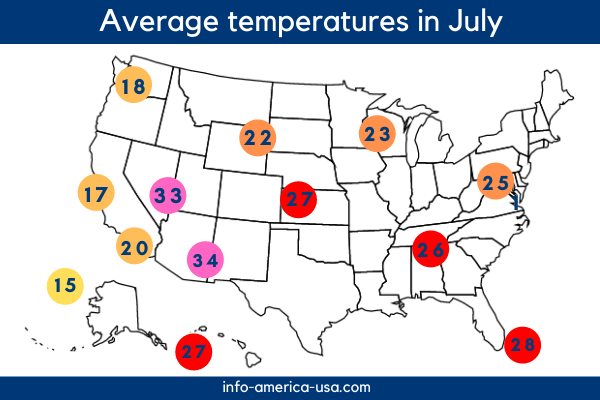 However, there are also regions like northern Alaska or the Hawaiian Islands that are cold or hot all year round. But let's take a detailed look at the individual climate zones in the USA:

The climate in the East of the USA

The Eastern half of the USA is under the influence of the Atlantic Ocean and the Gulf of Mexico and is roughly divided into two major climatic zones: the temperate to continental Northeast and the subtropical Southeast.

The temperate in New England

For the most part, the New England states have a temperate climate with cool to mild winters and moderate to warm summers. In the winter months, however, temperatures below 0 °C and heavy snowfall are not uncommon, especially in the Northern states such as Maine or Vermont. Due to the maritime influence of the Atlantic Ocean, precipitation is distributed rather evenly throughout the year.

Continental climate in the North

The further West you go, the more continental the climate becomes. In some regions, the annual temperature fluctuations are more than 30 °C inland. Cities like Chicago or Des Moines have cold to very cold winters and hot summers. Precipitation decreases as you go west. In addition, the weather in the middle of the continent can change abruptly in both winter and summer, and severe thunderstorms and storms are common. 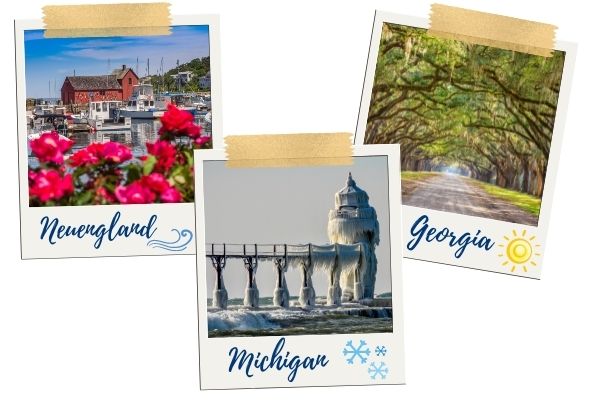 In the subtropical South of the USA, summers are hot and humid, and winters are mild. Nevertheless, there are many climatic nuances in this vast region. The farther North a state is located, the cooler the winters become. There can even be plenty of snow in the winter months in the Northern part of the American subtropics. In contrast, the thermometer in the Gulf of Mexico areas shows plus degrees year-round. Precipitation is around 1,000 mm per year and is fairly evenly distributed throughout the year.

Attention, turbulent times!
In late summer, the Southern States of the USA are often hit by tropical storms and hurricanes that move from the Atlantic Ocean to the American mainland and cause great damage.

In addition, the entire region between the Rocky Mountains and the Appalachians is at risk of tornado formation. The strongest tornadoes occur in what is known as Tornado Alley, stretching from Texas through Oklahoma, Kansas, Missouri, and Nebraska to South Dakota. 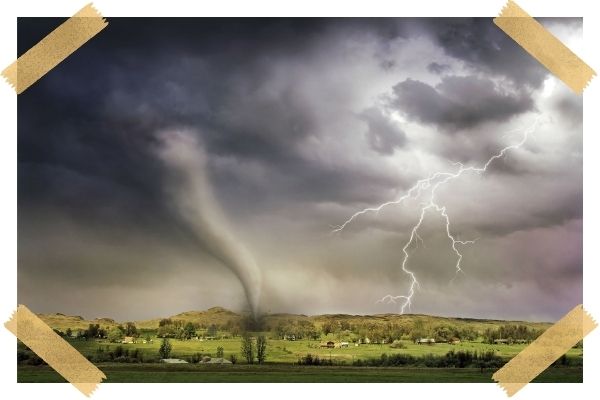 The climate in the West of the USA

The climate zones in the Western USA are mainly shaped by mountain ranges that stretch for several hundred kilometers across the North American continent. The Rocky Mountains and the Sierra Nevada block the oceanic influences of the Pacific Ocean and sometimes create extreme climatic conditions.

The climate in the Great Plains

East of the great mountain ranges of the American West, the Great Plains have formed, featuring prairie vegetation. Due to their sheltered location behind the Rocky Mountains, precipitation is low, which is why the climate is also referred to as a dry continental climate.

Temperature variations, on the other hand, are high: summers are hot and thundery, winters are cold and relatively long. How far temperatures drop in winter depends on the latitude. The further North a region is, the lower the thermometer drops.

The climate in the mountains

The climate in the mountains of the United States generally shares the characteristics of neighboring lower regions, but conditions change with increasing elevation. Precipitation increases with height while temperatures decrease.

Winters in the Rocky Mountains are, therefore, often snowy. Especially in the Northern part, e.g., in Montana, high amounts of snow, as well as large annual temperature differences, can be expected.

Between the Sierra Nevada and the Rocky Mountains lies a plateau with extremely arid conditions. Due to the isolated location in the middle of the mountain ranges, deserts and semi-deserts have formed here. Despite the aridity and sparse vegetation, there are also some densely populated urban centers such as Las Vegas, Tucson, or Phoenix. 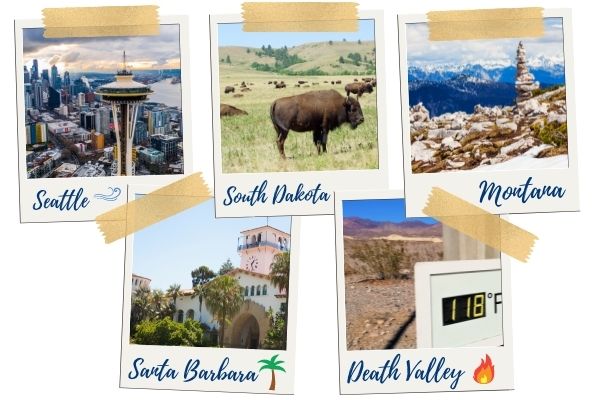 The climate at the West Coast

The climate on the US West Coast is strongly shaped by the Pacific Ocean. The Northern part, in Washington and Oregon, has a temperate, oceanic climate. Summers are cool with little precipitation, and winters are mild and humid. Annual temperature fluctuations tend to be small because the proximity of the ocean acts as a regulator. Frost and snow are unlikely to occur in the coastal areas.

Further to the South, in California, extends a subtropical, mediterranean climate zone along the Pacific coast. The winters are warm and have high precipitation, while the summers are dry and warm to hot. With variations of less than 10 °C, the annual temperature changes are rather small.

The climate in Alaska

The polar and subpolar regions in Alaska are among the most extreme climates in the United States. Generally, there is a long and severe winter. But depending on latitude, altitude, and distance from the Pacific Ocean, the climate has variations.

In the polar North of Alaska, freezing temperatures of up to -50 °C prevail in winter, but snowfall is almost non-existent. In the short, cool summers, the thermometer rises to no more than 5 °C. The interior part of Alaska has a subpolar continental climate. Here, too, the annual temperature changes are very large, with differences of about 40 °C, but the amount of precipitation is low. Summers are relatively warm but last only a few months.

The best place to stay is on the East and South coasts of Alaska, which have a more temperate climate due to the influence of the Pacific Ocean. Summers are mild, and winters less harsh. Precipitation levels are significantly higher than in the rest of Alaska. Along this mild coastal strip also lie the largest city, Anchorage, as well as the capital Juneau.

Tip: During the polar night, the famous aurora borealis radiate in the Alaskan sky. 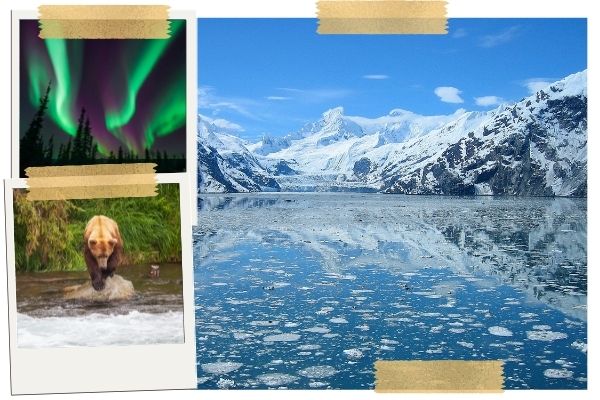 The climate on the Hawaiian Islands

The paradise-like Hawaiian Islands are located in one of the most pleasant weather zones in the USA. The tropical climate provides not only lush and abundant vegetation but also warm to hot air and water temperatures year-round. Only the high mountains on Big Island and Maui are slightly cooler. Rainfall varies from island to island. For example, the Westernmost island of Kauai is known as one of the rainiest places in the world. On Big Island in the far East, on the other hand, precipitation is comparatively low. 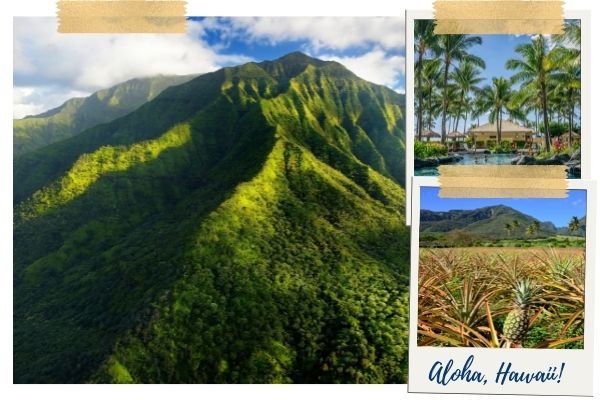 Would you like even more information about your favorite place in America? No problem, in our large portraits of all states and top cities in the USA, no question remains unanswered!