Alcatraz Island in San Francisco Bay is best known for being the toughest prison in the world. Learn all about "The Rock," the legends around Alcatraz, and how you can best visit the former prison island.

Alcatraz is a San Francisco Bay island in the US state of California, home to the former maximum-security prison Pacific Branch Disciplinary Barracks. The fortress was notorious as the toughest prison in the world since the 1930s and housed well-known felons such as Al Capone and George "Machine Gun" Kelly.

The history of Alcatraz

Alcatraz Island was first used as a military fortress in 1850 and, together with Fort Point and Lime Point, formed a "defense triangle" in San Francisco Bay.

Over time, however, Alcatraz increasingly lost its function as a defensive fortress and housed primarily military prisoners. In the course of its 80-year history as a military prison, the old citadel on the island was completely demolished and rebuilt by the prisoners. 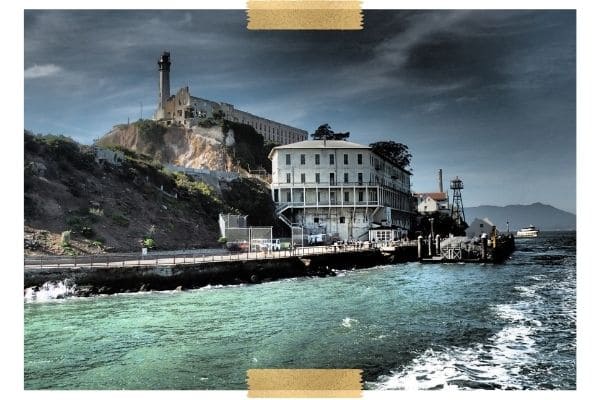 The new building, the Pacific Branch Disciplinary Barracks, later became famous as "The Rock." In 1934, Alcatraz was converted to federal prison. The first 137 prisoners moved in on August 11th, 1934. By 1963, Alcatraz Federal Penitentiary housed some of America's most dangerous criminals.

Alcatraz was considered completely escape-proof, except for a few unconfirmed breakout legends, due to a combination of very bad weather and strong currents in the shark-infested, frigid waters surrounding the island.

The sea was ultimately to blame for the closure of the maximum-security prison in 1963: the aggressive saltwater used to operate the prison's toilets, among other things, had severely damaged the fabric of the building. A renovation would have been too expensive. 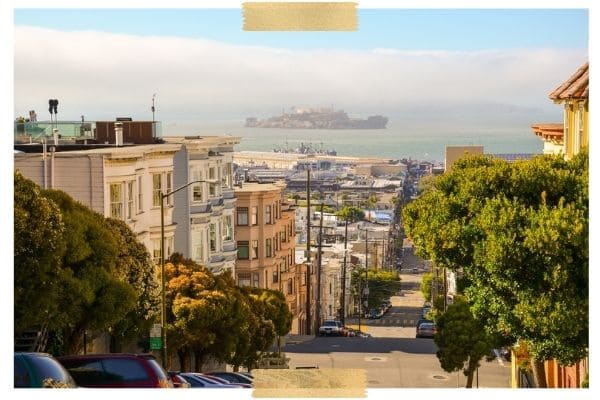 On March 21st, 1963, the last 27 inmates from Alcatraz were transferred to other American prisons. Alcatraz became part of a national recreation area and received designation as a National Historic Landmark.

A late chapter in Alcatraz's history was the 1969 occupation, in which a group of 89 Native Americans occupied the island for 19 months to effect a return of the landmass to the Native Americans. This act of civil disobedience received great public support but was forcibly ended by the US government.

Today, Alcatraz Island is managed by the National Park Service as part of the Golden Gate National Recreation Area and is famous for its biodiversity, among other things.

If you are not a US citizen or Green Card holder, you will need a US visa or ESTA to enter the USA.

How to get to Alcatraz

You can only get to Alcatraz Island by ferry with Alcatraz City Cruises. The ferries depart from Pier 33 southeast of Fisherman's Wharf. 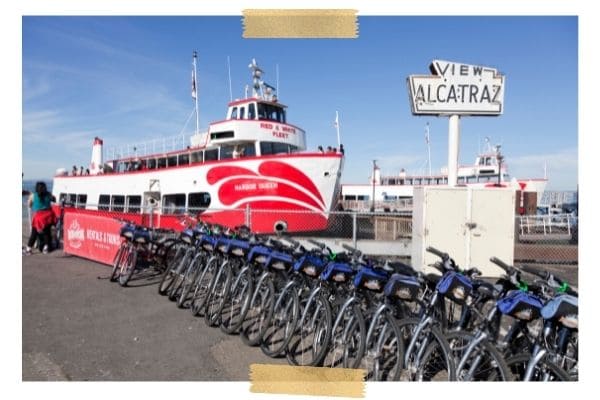 The best way to get to Pier 33 is to take the M-OWL bus or the F line light rail. The station near Pier 33 is called The Embarcadero & Bay St.

Unfortunately, there are no parking spaces right at Pier 33. The commercial parking lots along the streets are packed, especially in summer, and some charge horrendous parking fees. An additional hurdle: The time limit of the parking meters in the area is not sufficient for an Alcatraz visit (min. 3 hours). Therefore, we recommend arriving by public transport.

You can book different tours for a visit to Alcatraz Island. There are boat tours around the island, day and night tours through the buildings, and various programs and presentations.

How to visit Alcatraz

Alcatraz is open daily except for a few holidays. Your visit to the island and the buildings is theoretically free, but you still have to pay for the ferry, the tour guide, and any special programs.

Alcatraz City Cruises ferries depart every 30 minutes from Pier 33 in San Francisco. After about 15 minutes of travel through the mostly stormy bay, you get off the ferry at Alcatraz Island. The fare includes an audio tour of the cell block, which features original recordings of eyewitnesses. Tip: Reserve your tour to Alcatraz early because tickets are often booked up weeks in advance.

Do you like it extravagant and want to see Alcatraz from above? Then book a helicopter or a seaplane! In addition to an aerial view of Alcatraz Island, you will also see many other landmarks of San Francisco during your 30-minute flight. For this unforgettable experience, you will pay between €200 and €300.

s you walk around Alcatraz Island, the audio guide explains all the important places and plays original sounds from former inmates, guards, and family members. The award-winning audio tour also surprises you with sound effects and will send a shiver down your spine here and there. In the prison building, you can visit the cell block, the dining room, the library, and the yard. Beware: the island is rugged and steep, and the weather unpredictable. It's best to wear waterproof clothing and sturdy shoes.

In the guards' housing block, you'll find a prison exhibit that takes you into the history of Alcatraz. The Alcatraz Cell House Museum contains possessions of former inmates, escape materials, and inmate art. Highlights of the exhibit include restored cell furnishings and photographs depicting daily life on "The Rock." The Parks Conservancy offers a number of replicas based on these historic items in its store.

If a normal tour of Alcatraz isn't spooky enough for you, you can book one of the sinister Night Tours with a special program. Or would you prefer something more natural? Then let the park service introduce you to the world of animals, which includes 5,000 birds from nine different species. A behind-the-scenes tour including the beautiful flower gardens is also available. The International Indian Treaty Council organizes sunrise gatherings on Native American Day and Thanksgiving to commemorate the 1969 occupation. You can also do a private event on Alcatraz, by the way. The package includes a private ferry ride, a private tour, and use of the event space, such as the shower room, dining room, or hospital.

Landmarks on Alcatraz Island include various buildings, the historic first lighthouse on the US West Coast, and a handful of historic and natural sites.

The Alcatraz Island Lighthouse was the first lighthouse on the West Coast of the United States. It rises into the sky at the southern end of the island and was replaced as the island's main lighthouse by a new, taller lighthouse in 1909.

The Alcatraz dining hall or Mess Hall was the eating space for the prisoners and staff of Alcatraz. You can also book this hall for a private event.

The Alcatraz Library was the prisoners' library and is located at the end of Block D. Each inmate had a library card and could place their book orders during breakfast in the dining hall. The books were then brought to the cell by the librarian.

Not far from the guardhouse in front of the path leading up to the cell building stand the ruins of the officers' club, where staff could initially buy food and other necessities. Later, the building became a recreation hall with a casino, dance floor, gymnasium, bowling alleys, and a bar.

Building 64 housed the apartments of officers and their families. The three-story apartment building on the southeast side of Alcatraz Island was in unspeakable disrepair for a long time but remained occupied to the end despite the newly built quarters on the parade grounds.

The large parade ground is a concrete area in front of the lighthouse at the island's southern end. The area was intended to be used for military exercises and parades, but after the conversion to federal prison, it was now only a playground and event venue.

The Model Industries building is a multi-story building on the island's northwest corner and originally served as a wash house. When it was renovated in 1939, it became an event building for prisoner workshops.

Alcatraz Island has become an important nesting site for seabirds, so about a third of the island is closed to visitors during nesting season. If you walk around the less flocked areas of the island, you'll spot cormorants, egrets, night herons, and various species of gulls among dilapidated and overgrown buildings and gardens.

The best photo spots for Alcatraz

Alcatraz is one of the most popular photo motifs in the USA! To get a perfect picture, you should position yourself wisely in good weather. Here are the best places to photograph Alcatraz:

You probably haven't heard these exciting facts about Alcatraz:

Do you feel that you still don't know enough about Alcatraz? Then you will find all the answers to your questions in our FAQ:

We recommend booking your tickets to visit Alcatraz Island a few weeks before your trip on the Internet, e.g., via the travel platforms GetYourGuide. The official Alcatraz City Cruises operator allows you to buy tickets through the National Park Service reservation system. You can also buy tickets for Alcatraz at Pier 33.

How much does it cost to visit Alcatraz?

A standard adult ticket to visit Alcatraz costs approximately $40. The ticket price includes the ferry ride from Alcatraz City Cruises, the audio tour of the cell building, and the Federal Lands Recreation Enhancement Act fee. For certain special events, such as the Indigenous Peoples' Day Sunrise Gatherings, you pay only $14. However, this does not include a guided tour of the building.

Can I bring any luggage to Alcatraz?

Bags larger than a standard backpack are not allowed on Alcatraz Island.

What are the opening hours of Alcatraz?

Alcatraz is open every day except Christmas, Thanksgiving, and New Year's Day. For the exact ferry schedule, visit the Alcatraz City Cruises website.

If you're ever in San Francisco, don't miss the top sights of the hippie metropolis. The Golden Gate Bridge, Lombard Street, the Painted Ladies, and many other sensations await you! Find out more in our San Francisco sightseeing guide!