The White House, the US Capitol, and the Washington National Cathedral are just three of the reasons to visit the capital of the USA. Learn all about the home and workplace of the US President: welcome to Washington D.C.!

The United States government district of Washington, D.C. is located on the East Coast of the United States on the border of the two US states of Maryland and Virginia. It is neither a US state nor a proper city but a district.

Many cultures call the Chesapeake Bay headquarters of power home. According to the U.S. Census Bureau, nearly 170 different languages are spoken in D.C. The largest populations among the approximately 30% immigrants come from El Salvador, Vietnam, and Ethiopia.

The climate in Washington D.C.

Washington has a humid subtropical climate, which is why many summer visitors complain about the sweltering heat. However, since D.C. is right between two different climate zones, there are still cold winters.

The most pleasant months to travel to Washington D.C. are September, October, and May.

How to get to Washington D.C.

For a flight to Washington D.C., you'll usually pay between €500 and €700 from Europe and travel between 11 and 15 hours with at least one stopover.

The main airports in Washington D.C. are:

If you are not a US citizen or Green Card holder, then you will need a US visa or ESTA to enter the US.

Washington D.C. offers you a wide range of budget and luxury hotels as well as very cheap hostels and apartments for little money.

Whether it's a Hyatt, Hilton, or Holiday Inn, some of the best hotels in the USA are located in the much-admired Washington D.C. area. Here are our favorite D.C. hotels:

A ten-minute walk from the White House, the chic Capital Hilton perches at a busy intersection. A fitness center, king-size beds, spacious and tasteful hotel grounds, and a fine restaurant are only topped by the view: from the top floors of the Capital Hilton, you can peer directly at the White House!

Not far from the US Capitol, you'll be staying in the chic and stylish Hyatt Regency, where you'll be pampered with a swimming pool, great fitness rooms, and exquisite specialties. Bonus: Step outside the lobby, and you'll see the Capitol's gigantic dome at the end of the street.

The lovely Holiday Inn welcomes you with a refreshing rooftop swimming pool, spacious rooms, rustic dining, and a small sports facility just off the big green "The Mall." The National Promenade, or National Mall, stretches from the Lincoln Memorial to the Capitol.

Long and short-term apartment rentals are common in Washington, D.C., as tourists, as well as countless employees of embassies, law firms, the US government, and other D.C.-type organizations and companies, commute to the District of Columbia.

Top platforms for apartment rentals in Washington D.C. include:

Make sure to get detailed information about your potential landlord before you book an apartment.

Washington D.C. is not exactly one of the cheapest places in the USA. This is a good reason to save at least a little on your accommodation costs. Prices for hostels start at just over €40. The cheapest ones are a bit outside the hot spots, e.g., in the North near Meridian Hill Park or around the Kennedy Recreation Center.

Washington D.C. is packed with attractions. Most of them are located on the National Mall, the big green national promenade in the middle of D.C. Rent a bike, hop on a tour bus, or take a long walk when the weather is nice.

When you see the White House for the first time, you might get teary-eyed: it's just a very special moment. However, you will take souvenir photos through a fence. To book a tour of the White House, you must first apply to your US Embassy, which can take several weeks. Therefore, we recommend planning well in advance.

The US Capitol is the command center of America and regularly makes world history thanks to its US Senators and Congressmen. Apart from that, it is a truly imposing building full of artwork! Don't miss a guided tour of the halls and treat yourself to a walk through the beautiful park.

In addition to the impressive statue of Abraham Lincoln, you will also find an exhibition with many interesting facts about US history in the Lincoln Memorial. Do you have a US National Park Pass? Then you can get your stamp here in the Memorial!

The Washington National Cathedral is a magnificent Gothic-style church with the typical ornate stained glass windows and many enchanting architectural details. After a devotional walk through this masterpiece of a cathedral (we recommend an official guided tour), you can stock up on great souvenirs in the church's own store.

You can find a number of great museums and cultural centers not only on an extended tour of the National Mall but also in North D.C. Some of the best galleries and museums in Washington D.C. include:

Hard to believe, but the small district of Washington D.C. has its own national park! Actually, it's more than one, but they are always referred to collectively:

In the extensive National Park National Mall, you can explore almost all tourist highlights of Washington D.C.. Part of the park system are many big and small green areas and historical monuments:

At the eastern end of the park, you will find the Capitol and to the north, the White House. Around the Tidal Basin reservoir, 3,000 cherry trees blossom in spring and provide you with the perfect photo opportunity. 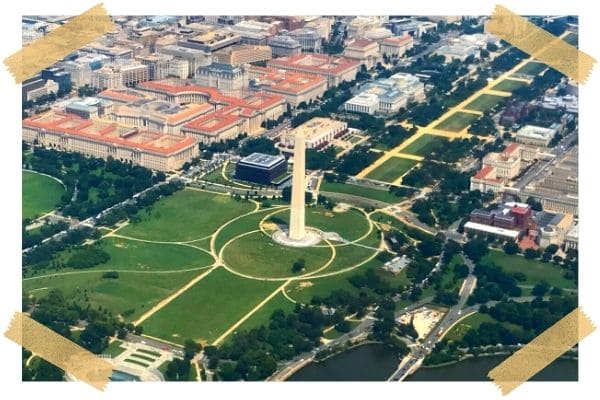 Food and drinks in Washington D.C.

Northwest of the National Mall but still within the city limits, you will find Georgetown. Here, you can enjoy great dining and nightlife. Take in a jazz concert over a snack at Blues Alley or meet friends at the legendary Thunder Burger & Bar.

For Belgian beer and upscale treats, head to The Sovereign on Wisconsin Avenue. By the way, people in Washington D.C. drink more wine per capita than residents in any other US state. So feel free to stay true to the D.C. motto and make a detour to Barcelona Wine Bar on 14th Street!

Some typical snacks you should try in Washington D.C. are the legendary Half Smokes (smoked sausage) and the delicious Grilled Cheese Sandwiches!

The history of Washington D.C.

Until Europeans arrived in what is now the District of Columbia in the 17th century, the Nacotchtank, a tribe of Native Americans, lived here. European settlers appropriated the area, including the valuable resources of the Nacotchtank tribe, and established their own communities: Alexandria and Georgetown.

Neighboring Washington was originally founded as a city and initially comprised only about one-third of the district. The federal District of Columbia, established in 1790, did not include neighboring communities until later.

When George Washington became President, New York City was still the capital of the United States. However, since the 13 founding states of the USA wanted a central location on the populated East Coast as their capital, D.C. was envisioned as the seat of government. On June 11th, 1800, Washington D.C. officially became the capital of the United States.

During the British-American War of 1812, the newly built Washington D.C. was nearly destroyed, and the population numbers remained small for a long time. It was not until slavery was abolished that D.C.'s population grew, as many former slaves moved to the city.

Because Washington D.C. is not affiliated with any US state, residents of the capital were not allowed to vote at the national level for a long time. Only since the 23rd Amendment of 1961 have D.C. residents been allowed to vote in presidential elections. In January 2021, there was a second attempt to turn D.C. into a state with a legislative initiative (Washington, D.C. Admission Act H.R. 51).

You probably haven't heard these exciting facts about Washington D.C. yet:

Are you as excited about Washington D.C. as we are? Then it's only understandable that you'd like to stay here. Our tips for living and working in Washington D.C. might help you.

Thanks to a pioneering role in remote work opportunities, you don't necessarily have to live and work on-site in Washington, D.C., but can instead move to a nearby state. This is industry-dependent, and there are also many hybrid solutions that involve working days in an office and the rest of the time from home.

Application and hiring processes tend to be a bit slower in Washington D.C. than in the rest of the U.S., largely due to security. So you can expect a few extra steps in the process when applying in D.C.

As the administrative and political center of the United States, Washington D.C. promises you, above all, a high salary. However, this depends a lot on the industry you end up in. Some of the major sectors in D.C. include tourism, finance, education, healthcare, and research. A very large portion of D.C. workers is also employed by the US government.

The most common occupations in D.C. are managers, business and financial consultants, administrators, and lawyers. As a lawyer, architect, or engineer, you will get the most money here.

Life in Washington D.C. is characterized by hot and humid summers, many (sports) events, and an exciting cultural mix. Many residents complain about the high cost of living, which is more than 60% above the national average. Often, the solution to this problem is to commute or work from home!

Many people prefer to move to Northern Virginia or Maryland rather than live in the expensive District of Columbia.

By the way, Washingtonians like to ditch the car and commute by public transportation. This is how U.S. President Joe Biden earned his nickname, "Amtrak Joe," because he commuted between Delaware and Washington, D.C. on the Amtrak for 36 years.

Come to Washington D.C. with a Green Card

With a Green Card, you can live and work in the USA indefinitely. And the good news is, getting a US immigrant visa is pretty easy through the Green Card Lottery.

Each year, 55,000 Green Cards are raffled off to US immigrants from around the world. Be sure to enter the annual lottery, even if you're trying to get your Green Card through a US employer at the same time!