Dynamic and economically successful Atlanta is perfect for expats looking for a fresh start. But also travelers will experience unforgettable days in the capital of Georgia amidst top sights like The World of Coca Cola, Centennial Olympic Park, and Stone Mountain.

Atlanta is located in the north of the US state of Georgia at the foothills of the Appalachian Mountains at an altitude of 320 m. This makes the city the highest metropolis east of the Mississippi River. It has an exceptionally high number of trees in its urban area, which is why it is also known as the "City of Trees," or the "City in the Woods." According to the National Forest Service, Atlanta has the most heavily forested urban area (47.9% of the land area) in the USA.

In contrast to the many trees, the buildings constructed during the late 20th century are in the style of modern architecture. The glass towers that gave the city its current skyline include the State of Georgia Building, the Georgia-Pacific Tower, the Westin Peachtree Plaza, and the Bank of America Plaza.

Since the 1990s, Atlanta has had steadily increasing populations. According to the 2020 Census, the largest population groups today are African Americans (51%), Whites (41%), Hispanics (6%), and Asians (4%). 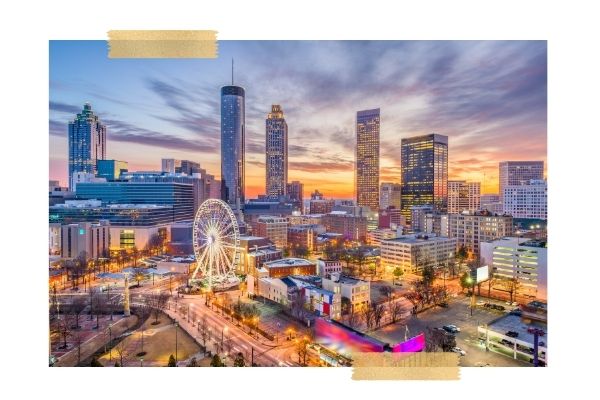 Atlanta can be classified as having a humid subtropical climate and offers you the variety of all four seasons. In the summer, average temperatures rise up to 27°C in July, while the coldest month, January, averages only 1°C. If you travel to Atlanta in the summer, you can expect high humidity and short hot showers or summer thunderstorms.

Hartsfield-Jackson International Airport (ATL) in Atlanta is the world's largest airport in terms of passenger volume. This is because Atlanta is primarily a major hub for domestic flights in the USA.

If you want to get to Atlanta's busy airport from Europe, there are several direct flights available, for example,from Frankfurt am Main, Paris, London, or Amsterdam. The cheapest non-stop flights we could find were around € 650.

If you are traveling to Atlanta from Asia, you will find a few direct connections: there are a few non-stop flights between Tokyo and Atlanta and between Dubai and Atlanta. In many cases, however, you'll have to change planes in a European city, in Dubai, or on the US West Coast, such as Seattle. Depending on the departure point in Asia, prices generally vary between €700 and €1,400.

Travelers from Melbourne or Sydney in Australia have to make at least one stopover, usually in Los Angeles, and pay around €1,500.

When booking your plane ticket to Atlanta, remember that you will also need a US visa or ESTA to enter the United States.

Do you still need a place to sleep during your stay in Atlanta? We have a few tips for every travel budget.

You will find a high density of hotels in Atlanta, especially in the downtown area. But also north of the city center, you will find a variety of accommodations, where you can usually save a few dollars.

You'll find good value for your money in Atlanta at the Element Atlanta Buckhead, just north of the city center. The hotel is about 7 km from the central Atlantic Station and offers a fitness center and a 24-hour reception.

At Reverb by Hard Rock Atlanta Downtown, you'll be right in the middle of the action. This upscale hotel near Centennial Olympic Park offers a restaurant, a fitness center, a bar and lounge, and a terrace.

Looking for something a little more luxurious? Check into the posh Candler Hotel, where you'll not only stay close to Atlanta's major attractions but also enjoy sumptuous interiors and a wealth of amenities.

Do you want to feel at home even on vacation and maybe save some money at the same time? For traveling groups or families, an apartment can be a good alternative to a hotel. Take a look around right now:

You will have to search for hostels in Atlanta for a very long time because they are extremely sparse. An alternative is to stay in a motel: the cheapest accommodation we could find was about €55 per night.

Our top five things to see in Atlanta should be at the top of your travel list.

No brand is more closely associated with Atlanta than Coca Cola. The famous soft drink with the iconic red and white logo was invented here in 1886 by physician and pharmacist Dr. John S. Pemberton. In The World of Coca-Cola, you'll learn how the brown soda became one of the world's most popular beverages. In the "Scent Discovery" exhibition, you can also test your sense of smell and learn more about the origins of different scents and flavors.

One of the absolute highlights of Atlanta is a visit to the Georgia Aquarium. Here, you can see more than 100,000 marine creatures up close and participate in numerous interactive experiences. You'll be especially fascinated by the huge whale sharks, the rare albino alligators, and the Californian sea lions. And if you're feeling daring, the Georgia Aquarium gives you the opportunity to participate in a shark tank diving program.

Flower and nature fans can enjoy an abundance of color year-round at the Atlanta Botanical Garden. Explore the Orchid House at the Fuqua Orchid Center and the Desert House, stroll through the Rose Garden, make yourself comfortable in the Conservatory, or find your Zen in the Japanese Garden. For the best view of the Botanical Garden, stroll along the elevated promenade.

Atlanta is the birthplace of Nobel Peace Prize winner Dr. Martin Luther King Jr. and also the site of his final resting place. Today, two entire blocks on Auburn Avenue are dedicated to the important American civil rights activist. The National Historic Site includes the house where Martin Luther King Jr. was born in 1895, Ebenezer Baptist Church, where he and his father served as ministers, and the Freedom Hall Complex, where the civil rights icon's grave is located.

Tip: You'll gain exciting insights into US history during the National Park Service's free tours of the birthplace of Martin Luther King Jr.

If you are on vacation in Atlanta, you should definitely take time to visit the largest granite mountain in the world. Stone Mountain is located about 26 km east of Atlanta and is a popular getaway, especially for families. See the relief of Confederate war heroes Jefferson Davis, Robert E. Lee, and Thomas J. "Stonewall" Jackson carved on the front of the mountain, and then hike to the top. If you visit Stone Mountain in the summer, you may see a special highlight: a laser show projected onto the granite to choreographed music.

Do you want to enjoy history, art, and culture while you're on vacation? Atlanta offers you a whole range of first-class museums where you can discover many interesting and new things.

Nature and parks in Atlanta

Atlanta is known as a very green city. Although you'll find trees virtually everywhere in the city, you can relax especially well in Piedmont Park and Grant Park.

Piedmont Park is the most famous park in Atlanta. With the skyscrapers of Midtown in view, you can walk, rollerblade, play basketball, or picnic by the pond in this beautiful piece of green. Piedmont Park also regularly hosts many concerts and other events, some of which are free.

Centennial Olympic Park was created in the middle of downtown for the 1996 Olympics. Here, you can picnic with a spectacular view of the skyline or admire the public art in the park. The dancing fountains are a highlight for children in the summer. Occasionally, Centennial Olympic Park hosts free concerts and movie screenings.

If you're looking for ideal vacation souvenirs in Atlanta, pay these places a visit:

Food and drinks in Atlanta

If you're a fan of hearty Southern cuisine, Atlanta is the city for you. But you won't be short of sweet temptations either. Typical specialties in the "City in a Forest" are:

After dinner, Atlanta's nightlife awaits! Here are some tips:

Looking for the best photo locations in Atlanta? Our top five Instagram hotspots will give an upgrade to your Instagram profile:

The history of Atlanta

The territory where the city of Atlanta is located today was inhabited by the Cherokee and Muskogee Indians and called "Pakanahuihli" ("Standing Peach Tree").

The first European settlers arrived in 1823. In 1836, the place was connected to the American railroad network and was first known as "Terminus" because the railroad line from Chattanooga, Tennessee, ended here. In 1848, the town's name was changed to Atlanta.

During the American Civil War, Atlanta was an important railroad hub for the Confederate South. Therefore, the city was burned to the ground by General William T. Sherman's Union troops in November 1864. Although about 90% of Atlanta's buildings were destroyed, residents quickly returned and rebuilt their city.

In the 1960s, the city played a central role in the American Civil Rights Movement led by Martin Luther King Jr. In 1974, Maynard Jackson was elected Atlanta's mayor, also becoming the first African American mayor of a Southern metropolis.

The eyes of the world turned to Atlanta again in 1996, when the 26th Summer Olympics were hosted.

You probably didn't know these interesting facts about Atlanta:

Do you like the American South and Atlanta so much that you want to stay there forever? Our tips on living and working in Atlanta will give you some ideas on how to make your dream come true.

Dynamic Atlanta offers you excellent job opportunities because the city's economy is booming. The metropolitan region around Atlanta ranks 10th among the strongest economic regions in the United States.

Atlanta's success is due in part to the numerous Fortune 500 companies that have settled in the city. Famous names include Coca-Cola Company, Delta Air Lines, CNN, UPS, Novelis, and Georgia-Pacific.

Among the most successful and emerging industries in Atlanta today are the IT industry, the film industry, and television. Atlanta is also a major hub for air travel.

Living in Atlanta is quite affordable: according to the Cost of Living Index, the average cost of living in Atlanta is only about 7% higher than the US average. You can expect higher costs mainly in the areas of housing and transportation.

To Atlanta with a Green Card

Are you determined to move to Atlanta? Then you should definitely try your luck at the next Green Card Lottery, in which the US government gives away 55,000 Green Cards every year. It's really the easiest way to get permanent residency in the USA, and with just a few clicks, the application is made.